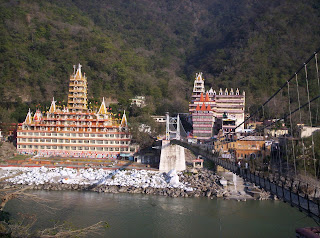 Finding Yourself in Rishikesh

We’ve talked before about the cultural and spiritual significance of the Ganges River.  Now let’s find out more about Rishikesh, a favoured destination for people with interests ranging from yoga and meditation to rafting and adventure.

Rishikesh is one of the names of the god Vishnu and roughly translates into “lord of the senses”.  In the Ramayana, the great epic saga of ancient India, Lord Rama came to Rishikesh to atone for having killed the demon king Ravana.  Who, by the way, had kidnapped Sita, Rama’s wife, and attempted to seduce her.  Despite having killed the villain, Rama had to seek the gods’ forgiveness, so off to Rishikesh he went, meditating on his actions and bathing in the holy waters of the Ganges.

And why did he choose Rishikesh?  Because meditating there helps bring you closer to moksha or the liberation from the endless cycle of birth, death and rebirth.  Not only is Rishikesh on the banks of the Ganges River, at the point where it leaves the mountains, it is also the starting point for pilgrims travelling to Badrinath, Kedarnath, Gangotri, and Yamunotri.  These four sites constitute one of Hinduism's most spiritual and auspicious pilgrimage circuits and every devout Hindu should visit them at least once.
Lord Rama’s association with Rishikesh is celebrated by the town in countless ways – for example, the famous Ram Jhula and Lakshman Jhula Bridges. Lakshman Jhula (see photo) is close to the point where you leave the river if you raft down to Rishikesh from Himalayan River Runners’ Ganga Base Camp. These days the bridge is made of solid iron but legend says that Rama’s younger brother Lakshmana crossed the Ganges on a flimsy jute rope at this very point.
Lakshman Jhula affords spectacular views of the river and the huge storied temples of Swarg Niwas and Shri Trayanbakshawar. If you stop to look and take photos, make sure you are not carrying any food or the resident monkeys will harass you!

The Beatles in Rishikesh
Some of us from a certain generation first heard of Rishikesh in the late 1960s when The Beatles visited the ashram of Maharishi Mahesh Yogi.  As with everything else The Beatles did, meditation became all the rage and several other artists and musicians followed in their footsteps.
The Beatles composed nearly 48 songs during their stay in Rishikesh – an amazing achievement considering they were only there for a month or two – and many of these ended up on their double album “White Album”.
Maharishi Mahesh Yogi’s ashram is now deserted. Its stone meditation huts, halls and shrines have been reclaimed by the jungle. But you’ll find many other ashrams, Ayurvedic centres and yoga retreats in tranquil settings around Rishikesh, offering classes for tourists as well as for aspiring yoga teachers worldwide.

Whatever your reasons for visiting Rishikesh, remember that you’ll find only vegetarian food there and drinking alcohol is frowned upon although not unknown.